Acou6tics Development – Behind The Scenes

My Name is Benjamin Stelzer, I am the lead developer of Acou6tics and Electri6ity and I’d like to take you on a behind-the-scenes tour and give you some insight on the development of our newest virtual acoustic guitar library.

Maybe you’ve already heard of Electri6ity, which is our award winning electric guitar library. The reason why I’m also talking about Electri6ity in this blog – just in case you were wondering – is that Acou6tics is meant to follow in the footsteps of this critically acclaimed library, using the same advanced technologies only to re-imagining the acoustic guitar instead of an electric guitar this time.

After releasing Electri6ity, the library quickly became very popular and we’ve got so much feedback from customers on it and even more request to create an acoustic version of this library using the same technology. So when we started to plan Acou6tics we first sat down, took all the feedback, the feature request and read through almost all the discussions on the internet about Electri6ity to get a feeling on what would be the perfect acoustic guitar library.   Doing this, it quickly became clear on what we had to lay our focus on: 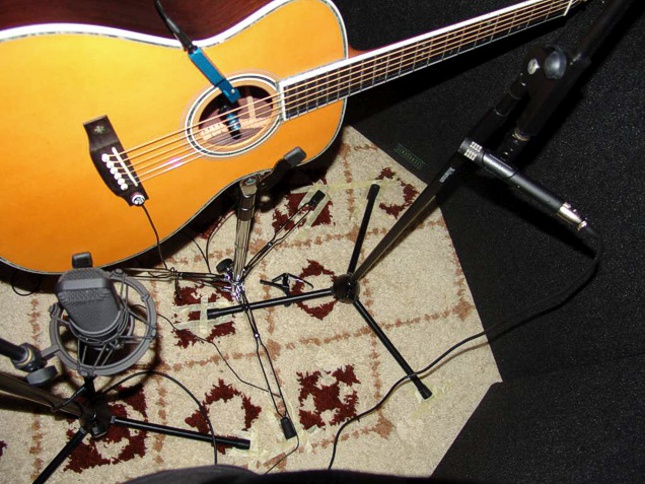 What we came up with in the end, was much simpler than our initial tests, but tone wise it was the most versatile recording setup, which perfectly captured the natural tone of all the guitars:
We recorded the guitars in Blumlein-stereo using two large condenser mics in a room which was treated in a way that is was almost completely dead, except for some carefully placed diffusers. This technique has a lot of benefits: it’s fully mono compatible, the mics used have figure 8 characteristics, which sounds much more natural than cardioid, the stereo image is excellent and the samples are very dry. Additionally we also recorded the piezo output of all instruments.

The realism of a virtual instruments depends on two factors: First of all, the important articulations, noises and nuances need to be captured in the recording process. And the second factor is an engine which plays back the samples in a way that resembles what a real player would do when playing that instrument. Our experience with Electri6ity, which also was samples extensively, already gave us a pretty good idea of what we had to record and how we had to record it.

But we also wanted to push the playback engine to a new level in terms of realism. So we spent weeks analyzing different playing techniques and nuances of a real guitar and figuring out ways, how to implement them into the engine. In the end we had a completely new sympathetic resonance engine, a physical modeling based approach for the pick position simulation, a completely new strum engine, a new chord detection engine – pretty much everything was completely rewritten from scratch. 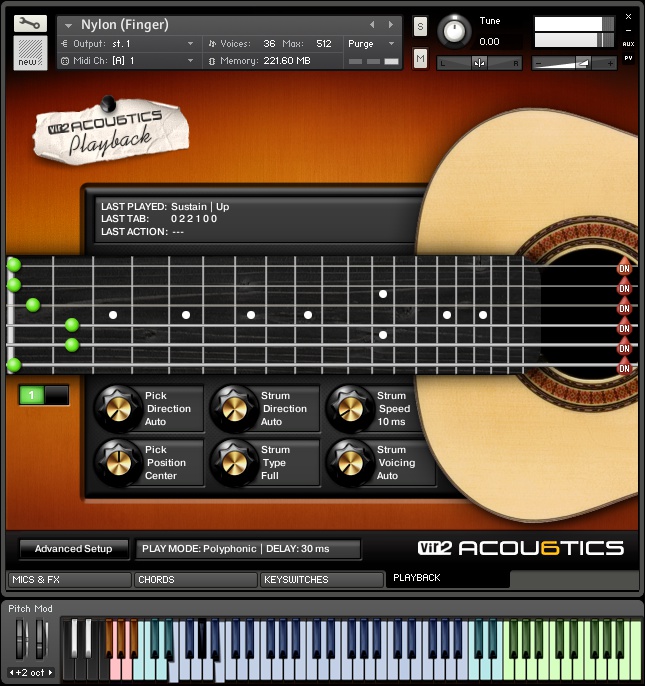 Here the feedback we got on Electri6ity was very helpful. We went through all the critiques and all the improvement requests to figure out how it would be possible, to offer the same flexibility and control the Electri6ity engine offered, but much easier to use. The Acou6tics GUI is very easy to handle and easy to understand, the instruments load pretty fast and the memory usage is very reasonable. 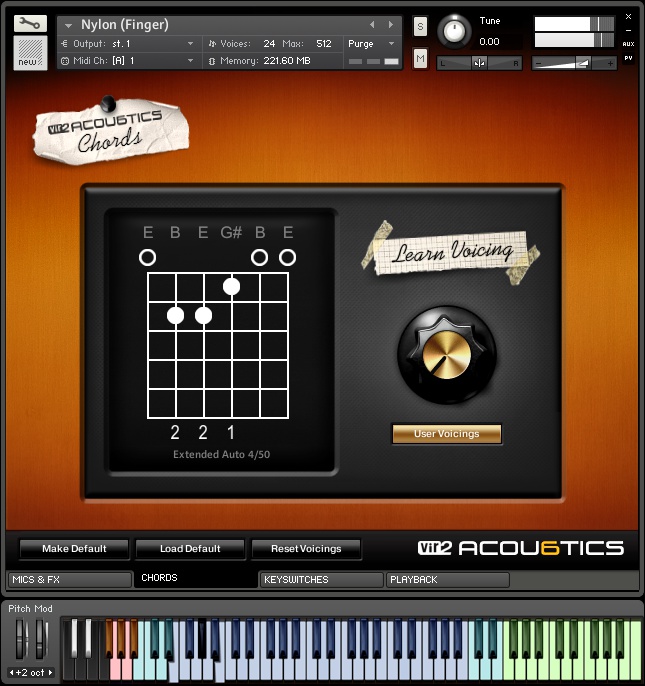 We are especially proud of our new chord & strumming engine. The chord library contains up to 25,000 guitar chords per instrument. This means that for almost every chord you are playing on your keyboard, the engine will instantly find the correct guitar voicing for that chord! But not only that, Acou6tics also allows you to learn user chords with only one knob. Whenever you play a certain chord on the keyboard, the guitar voicing you’ve learned for that chord is selected – and you can choose from up to 50 different guitar voicings for each chord.

The new strumming engine has a lot of humanization build and allows you to play realistic strum patterns in no time. We’ve even added transition strums, which are strums that often occur on a real guitar between two chords, since your finger will need time to finger the new chord on the fretboard. That added quite a bit of realism, since those transition strums are so audible and recognizable on a real guitar. 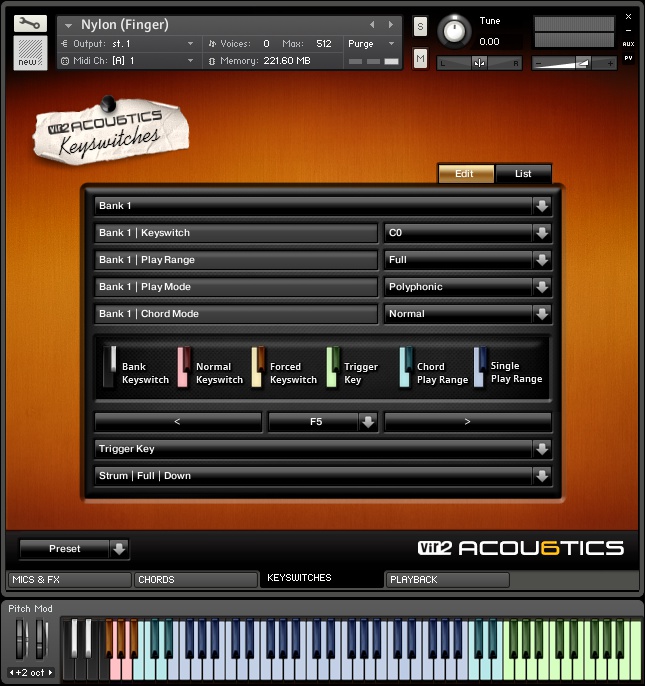 Acou6tics can be adjusted to exactly fit your needs! You don’t like the default keyswitch layout?  No problem. You can simply customize it.

You don’t like the default setup of the instrument?  No problem. You can customize it.

Almost every aspect of the playback engine can be customized and automated if necessary!

I hope you enjoyed this insight into the development of Acou6tics.

For more information and demos visit the Acou6tics page.

Acou6tics is powered by the industry-leading Kontakt engine. It is compatible with VST, RTAS (Pro Tools 9 & 10), and AAX (Pro Tools 10 & 11) plug-in formats allowing it to work seamlessly within any major sequencer, in addition to standalone use. 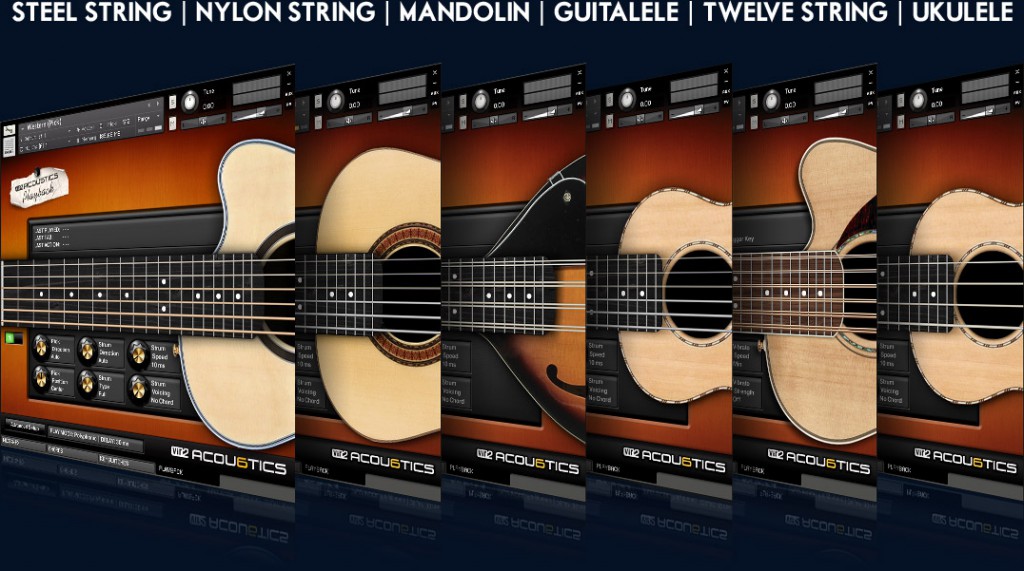 The Acou6tics interface is very easy to navigate. There are four main pages: Playback, Keyswitches, Chords, and Mics & FX. 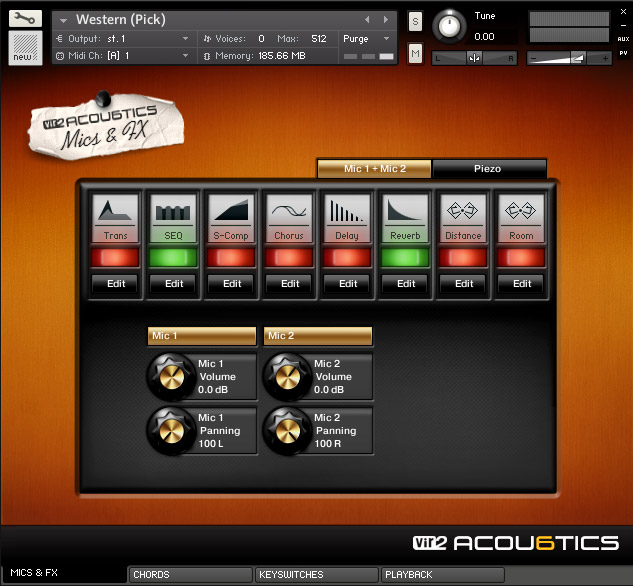